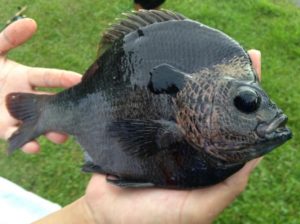 I was 15 and fishing was an important part of my life. Living near a river and not far from the Okeefenokee swamp, I had plenty of places to go. One of my favorite tools was a 10 foot cane pole rigged with 9 feet of 10 lb test monofilament line. To the end of that, I would tie a Mr jet orange top water fly with hackles and rubber legs. Most of the places we fished had heavy brush and trees hanging over the water so it was really difficult to cast a rod and reel rig, but I could take that cane pole and hold the fly carefully by the hook, bend the pole into a j shape and release the fly. In this way, I could slingshot that fly right under those trees and up next to a stump or log. With a little practice, I could put that fly about anywhere I wanted it.

One afternoon I went down to a little oxbow lake about a mile from our house carrying a five gallon plastic bucket that doubled as a seat and a place to carry fish. I began to work my way around the little lake and managed to pick up a crappie and a war mouth perch. I came to a nice open spot under some trees that were about 8 feet out in the water. The open spot was about the size of a king size bed. I shot my fly out and it landed right in the middle of that opening. I let it sit for a few seconds and then twitched it just a little. Suddenly the water exploded as a fish took that fly and started fighting. What a battle!! Of course I won and what a curious fish. It was bream shaped but much bigger and darker than any bream I had ever seen. Not only that but its head was brilliant purple! I thought it must have been some sort of anomoly, maybe it was a disease?

It didn’t really matter because he was going home with me. He was an inch and a half thick and almost as wide as both my hands. Boy was I proud of him. I thought “might as well see if there is another fish in that spot” so I shot that fly right back in there. Sure enough, in a few seconds I got another hit with the same results. Time after time I kept casting to the same spot and every time I hooked another of these purple headed fish. They were fighting so hard, the water was all frothed up and i couldn’t believe what was happening. On the 12th one, just as I got him on the bank, he fell off. When i went to pick him up I realized the fly was still in his mouth…it had come untied because of all the fighting they were doing. Well I just tied it back on and caught 4 more. 16 huge bream out of one little spot the size of a bed! I could hardly wait to get home and show the family this crazy catch. Somehow the walk home was a lot easier than it should have been, as a matter of fact, I ran about the last half. Not many of the people I know have heard of copperhead bream but that is exactly what I had caught. I have seen a few since then but none as big or none with the purple color as bright as those I caught that day. We had a big family, nine children, but that was enough fish for all of us.

Manage Cookie Consent
To provide the best experiences, we use technologies like cookies to store and/or access device information. Consenting to these technologies will allow us to process data such as browsing behavior or unique IDs on this site. Not consenting or withdrawing consent, may adversely affect certain features and functions.
Manage options Manage services Manage vendors Read more about these purposes
View preferences
{title} {title} {title}